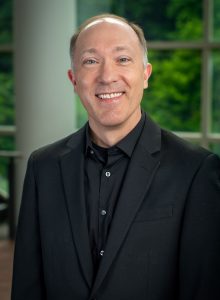 Kevin M. Geraldi is the newly appointed Director of Bands at the University of Illinois.  He comes to the University of Illinios from the University of North Carolina at Greensboro where he was Director of Instrumental Ensembles and Professor of Conducting. He conducted the UNCG Symphony Orchestra, Wind Ensemble, and Casella Sinfonietta, and teaches graduate and undergraduate conducting. With UNCG ensembles, he has performed in Dvořák Hall in Prague, Czech Republic, the Music Center at Strathmore in Bethesda, MD, at the national CBDNA conventions in Austin, TX, and Greensboro, NC, and at the American Bandmasters Association convention in Norfolk, VA. Previously, he taught at Lander University in Greenwood, SC and in the public schools of Westchester, IL, and was assistant conductor of the Central Illinois and Michigan Youth Symphonies.

Dr. Geraldi appears regularly as a guest conductor and he maintains an active schedule as a clinician and adjudicator throughout the country. Committed to promoting contemporary art music, he has commissioned and premiered numerous compositions and collaborated with composers including Philip Glass, Christopher Theofanidis, Joel Puckett, Steven Bryant, Carter Pann, and John Mackey. He has collaborated with artists including Nadja Salerno-Sonnenberg, Lynn Harrell, Dmitry Sitkovetsky, and Lindsay Kesselman. He has published several articles in leading scholarly journals on topics that reflect his interest in the history and performance practice of chamber music for winds, brass, and strings. His recordings with the Minerva Chamber Ensemble, Casella Sinfonietta, and UNCG Wind Ensemble are available on the Equilibrium and Centaur Records labels.

A devoted advocate for music education, Dr. Geraldi conducts dozens of clinics annually with high school orchestras and bands and honors ensembles throughout the country, presents frequently at music education conferences, and has published articles for music educators on concert programming and effective rehearsal strategies.

Dr. Geraldi holds the Doctor of Musical Arts and Master of Music degrees in conducting from the University of Michigan, where he studied with H. Robert Reynolds and Michael Haithcock, and the Bachelor of Music Education degree from Illinois Wesleyan University, where he studied with Steven Eggleston. His other conducting teachers include Gustav Meier, Kenneth Kiesler, Daniel Hege, and Rossen Milanov. He has also participated as a conducting fellow in workshops with Pierre Boulez, Paul Vermel, William Henry Curry, and Frederick Fennell. Dr. Geraldi is a recipient of the Thelma A. Robinson Award, presented by the Conductors Guild and the National Federation of Music Clubs, and the Outstanding Teaching Award in the UNCG School of Music. He is a member of the American Bandmasters Association, the Conductors Guild, the College Orchestra Directors Association, the College Band Directors National Association, the National Association for Music Education, Pi Kappa Lambda, Phi Mu Alpha Sinfonia, and is a National Arts Associate of Sigma Alpha Iota.